Flamenco, oranges and sunshine are usually the first things that spring to mind when Seville is mentioned, with cycling infrastructure last place on the list of sights. After all, junctions and bollards aren’t everyone’s idea of a good time. However, when you say the word “Seville” to a bunch of cycle campaigners, the chat on bike lanes comes thick and fast.

Seville is well-known for its investment in segregated cycling infrastructure and is considered a poster-child for cities with little on offer when it comes to cycling provision. With this in hand, myself and some fellow campaigners decided it was the perfect place to visit in order to see what Scotland could do on the active travel front with more investment. Of course, it is also sunny and warm, and for us four Scotland-based campaigners the UV rays and non-sub-zero temperatures were arguably more of a selling point than the blissful cycling. 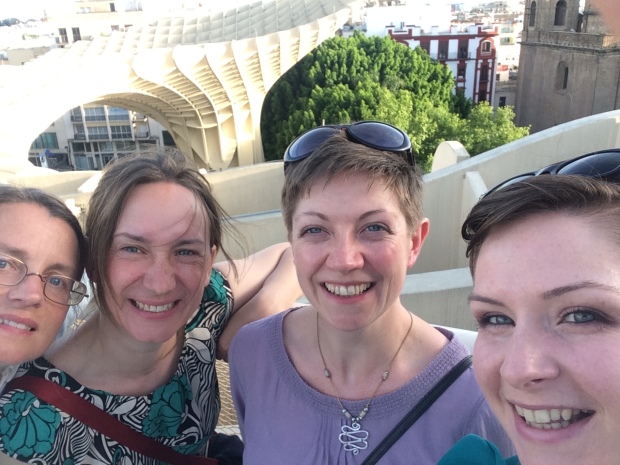 About ten years ago the local government bunged in 120km of separated cycling routes in Seville and the city hasn’t cycled backwards since, with modal share rocketing up from less than 1% to over 6% of all journeys in little over five years. So what was cycling in Seville like?

Pretty easy and enjoyable, as it turned out. Seville isn’t hilly, but it is tarmac-meltingly hot (summers routinely hit over 40C) so it’s a wonder I managed any cycling at all what with the extended bouts of sun cream slathering on every visible part of my body.

Despite the scorching heat everyday cycling is the done thing here, with people on bikes a regular sight. High vis and body armour, helmets and the like are a non-entity because people riding rarely have to interact with traffic, if at all.

The infrastructure is far from perfect, but it gets the job done. This is something to be mindful of – as campaigners we should obviously strive for Dutch-style best practice when it comes to cycle infrastructure design in our local communities, but the practicalities of less-than-amazing segregated infra do encourage more people to get cycling for everyday journeys. Separation from traffic is key, alongside direct routes that take people to places they actually want to visit.

Segregated cycle route from Seville to Camas; not perfect but separate from traffic and makes the journey easy by bike #5gomadinSeville pic.twitter.com/flkah95RB4

It’s fair to note that our visit was hardly a rigorous examination of the infrastructure on offer so my thoughts are really only impressions and takeaways from cycling about for several days (they do make orange wine in Seville and it’s sunny, so forgive us for our lax scientific attention to detail).

We encountered lots of tight bends, trees literally in the middle of the cycle lane, longish waits at traffic lights and tight squeezes due to the narrowness of the two-way lanes. The old and beautiful city centre was devoid of any decent cycling infra at all. But a lot of people were cycling, so the sometimes ropey provision has succeeded in the task at hand.

In so many ways this infrastructure is not perfect BUT these guys aren't mixing with traffic and that's pretty important #5gomadinSeville pic.twitter.com/x7V0ZysPjw

Where Seville seems to have chickened out is the reallocation of road space away from vehicles and over to people who walk and cycle. By and large, the bike routes had been squeezed onto existing pedestrian footways, with absolutely massive roads left untouched. This did really bug me, as I don’t think walking  should be compromised for cycling.

There is apparently a reason why this happened, with political tos and fros and an eventual compromise in the form of bike lanes being given the green light as long as they didn’t encroach on cars’ space. So motorist worship is still well embedded in Andalusia and it seems that more work needs to be done on Seville’s space reallocation, despite the clear evidence of an impressive modal shift to cycling. 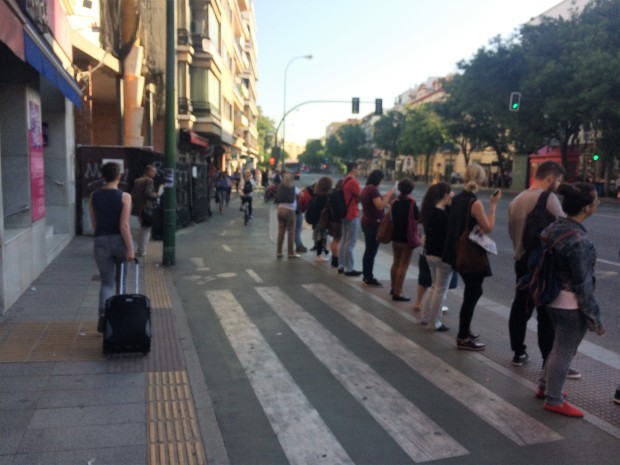 This is just a bit crap for all concerned, but somehow it still works. See massive road space left untouched, obviously.

With these gripes aired, I can still absolutely 100% state that everyday cycling was far, far superior to anything in Scotland to date. The connected nature of the infrastructure was vital with a proper network within densely populated areas of the city, it was completely separate from traffic, it was clearly visible to ensure as little pedestrian conflict as possible despite the squeezes, it was used by people on all kinds of bikes, it was kept well away from tramlines and crossed them at appropriate angles, was mostly well surfaced and was completely stress-free and easy to use. So that’s a win in my book. 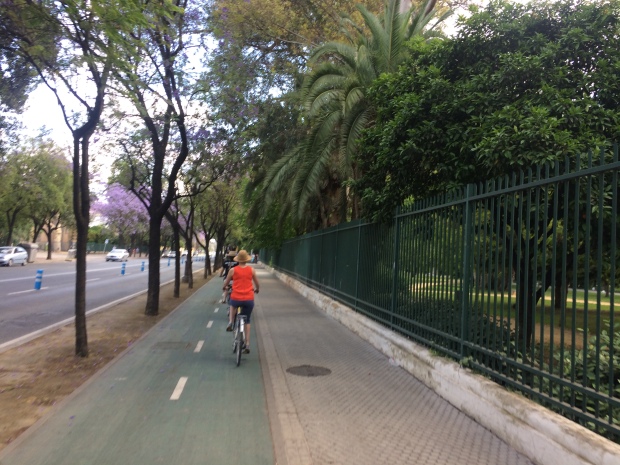 Using a bike to get around is, in my view, the most civilised and sensible way to get from A to B in dense urban areas. It’s difficult to articulate just how relaxed and enjoyable it was to explore the city by bike without tangling in traffic; the sights, smells and sounds of Seville made the ride from A to B even more fun and there was no stress or hassle at all. 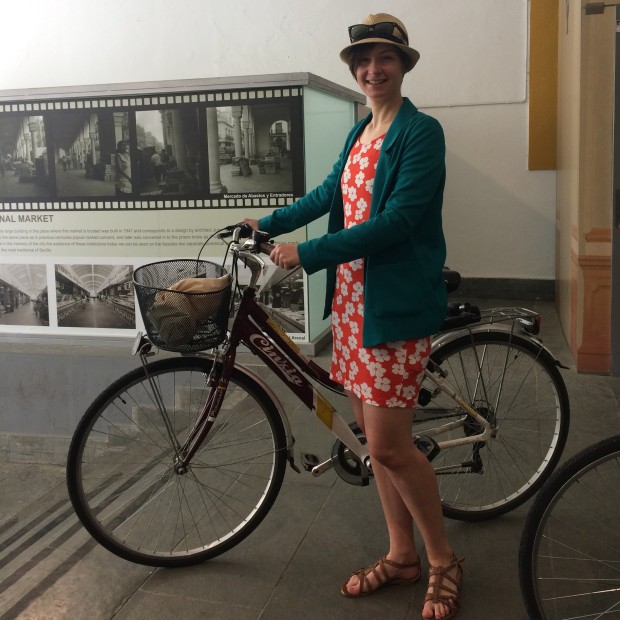 After seeing Seville’s successes first-hand, the need for more investment in Scotland to make cycling a real option for people is even clearer for me. On a trip to the Netherlands last year I visited a cycling utopia with 40 years’ head start on Scotland. But Seville is much, much closer to where we are now, and the gains it has seen from cycling investment have been evidenced through various studies and actual proper science and that.

So cheers Seville, it was a great trip and an eye-opener to what my home nation could achieve in a short space of time. Let’s drink to a future cycle-friendly Scotland 🙂 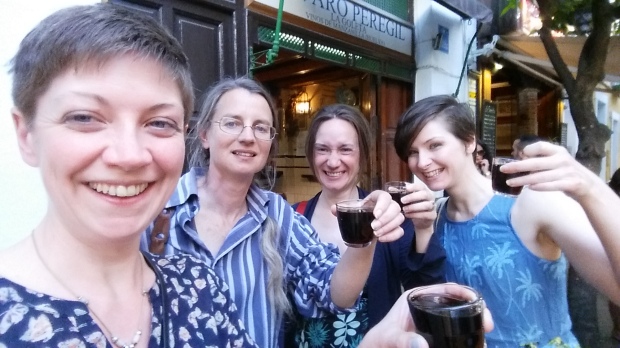 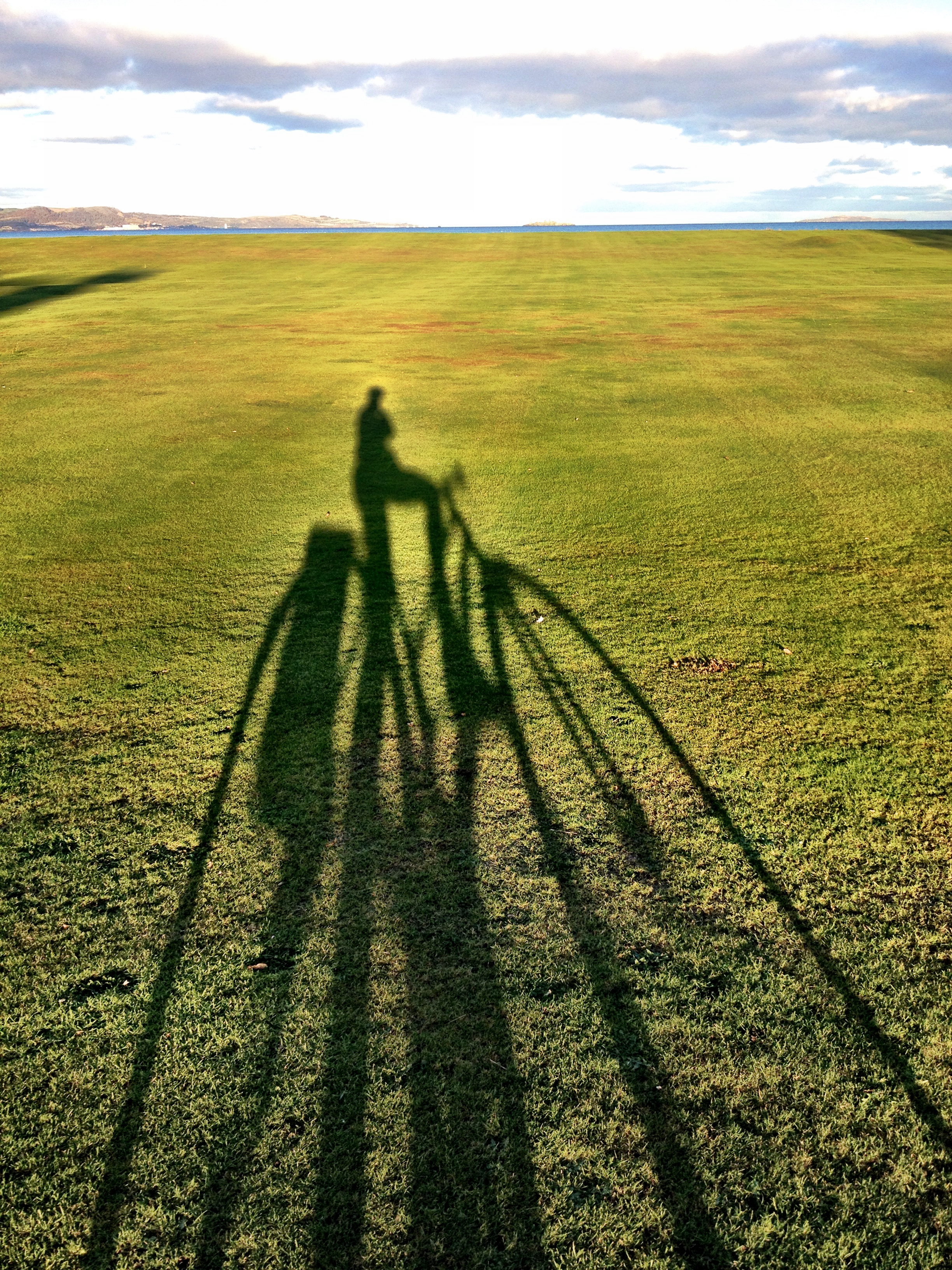